Thassos Archaeological Museum is located in the capital of the island, the city of Thassos (also called Limenas).The Museum boasts amazing displays of ancient findings from the amazing to discover island of Thassos, with a passionate team of staff who enjoy sharing their knowledge and passion with visitors.

The Museum was built in 1934, and it was recently renovated. The building is at the center of the capital Limenas and attracts thousands of visitors from Greece and abroad.

Thassos Archaeological Museum mirrors the ancient civilisation of the island. It houses vast collections of unique wealth, from 7th century BC up to 7th century AD.

A 3.5 metre high statue of Kouros, one of the earliest types of Hellenic sculpture, stands at the entrance. 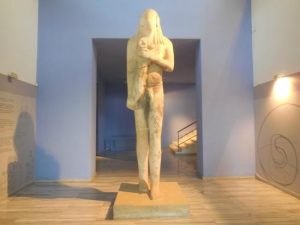 This 26 centuries old Kouros belonged to the altar of Apollo. We believe that the Kouros represents the God Apollo holding a ram; yet a theory says that it shows its creator. The man is naked, in a priest-like position, showing his left leg without bending it. The hair is tied with a ribbon, and it forms a pattern that falls heavily. The hair appears to be the last element on which the sculptor was working before abandoning the statue incomplete, after the marble cracked from the left ear towards the back of the head; we can still see this today. The sheer size of this statue makes it one of the best exhibits of the Museum.

Visitors will also admire a variety of wonderful busts and other impressive sculptures.

A great example is the bust of the head of Dionysus (c. 350 – 300 BC). The wavy hair leans diagonally, resting on the shoulders, completing the harmonic symmetry of God’s face. It is the image of an intellectual Dionysus. The half-open, unsmiling lips and the staring look give the bust a sense of distant peace.

The head of Panas (350 – 300 BC) is another wonderful bust. Its main characteristic, the round indentations over the forehead, held most probably goat horns.

Very impressive is also the bust of Pegasus (c. 500 BC). This flying horse seems to jump with its head leaning down and legs outstretched. The right wing is placed on the chest. The details of the neck, the tufted mane with the long plume, and the wisp of hair coming down the forehead from both sides show that this is a work of a great artist with an impeccable eye for details. 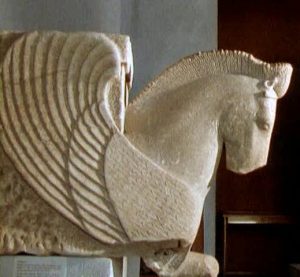 Another notable piece is the statue of the Roman Emperor Adrian (c. 130 BC). It was found in the Ancient Agora, which is next to the Museum. 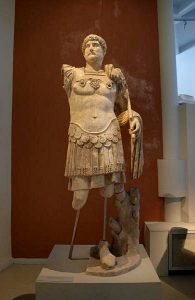 The small statue of Aphrodite with a dolphin and Eros, a work dating back to the Hellenistic era, was probably a room decoration piece. The Goddess seats like an Amazon atop a dolphin, while little Eros climbs on its tail. Her left hand holds part of her clothing that covers only the feet, revealing the nakedness of her body. The face of the Goddess, the hairstyle, and the fullness of the naked body remind the sculptures of Praxiteles. 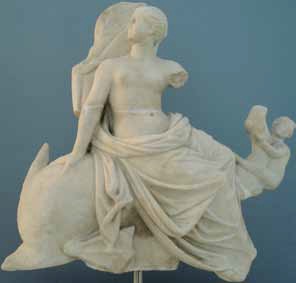 A Cycladic dish, depicting the Corinthian hero Vellerofont on top of the flying Pegasus (c. 7th century BC) is a wonderful example of ancient ceramics. The hero holds a spear and appears to be killing the three-headed Chimera. It is notable for its technique and the color range of its composition, still evident today. 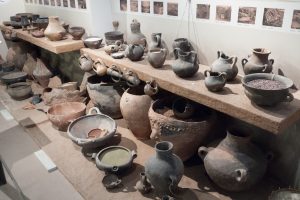 Οcher, the natural earth material of golden-yellow or light brown-yellow colour, occupies a big part of the museum, showing the importance of its processing and usage through the ages.

In a special room visitors can watch a documentary on Theagenis, a Thassian who was a famous Olympic games winner (c. 480 BC) in wrestling and pankration; a martial art that was a blend of boxing and wrestling.

An amazing experience for kids

Thassos Archaeological Museum offers a fun experience for kids. They can participate in special tours, with an entertaining and educational presentation of the exhibits. 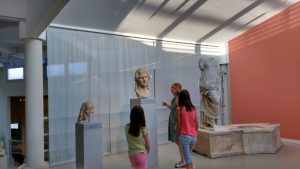 During these tours, the Museum becomes a destination for families from all over the world. The staff of the Museum are very passionate and knowledgeable locals who enjoy answering questions and making visitors’ experience meaningful and enjoyable.

[…] special gem of the island is the Archaeological Museum. It is located in the capital, Limenas. It boasts amazing displays of ancient findings from […]

[…] special gem of the island is the Archaeological Museum. It is located in the capital, Limenas. It boasts amazing displays of ancient findings from […]

A small, but very interesting Museum !!!